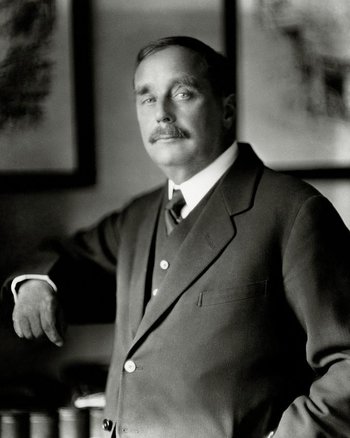 "Human history in essence is the history of ideas."
Advertisement:

Herbert George Wells (21 September 1866 – 13 August 1946) was an English Science Fiction writer who, along with Jules Verne, defined the genre during the late 19th and early 20th centuries, and spawned many tropes, including the Time Machine and the Alien Invasion.

His most famous works have been adapted into film multiple times. The Time Machine, The Island of Doctor Moreau, The Invisible Man and The War of the Worlds are probably the best-known.

Many of his novels were written in the first person, narrated by a typically unnamed character. In many adaptations, The Time Machine's unnamed time-traveler is H.G. Wells himself, which has led to other works using the real-life Wells as a time-traveling character.

In his later life, he turned more toward what he thought society should be like; fictional Utopias and Dystopias and nonfiction books on socialist thought alike. Though Wells thought of these works as more important, it's his early stuff that's thought of as classic, at least in part because it is generally better written. G. K. Chesterton compared him to Esau, saying that just as the latter had sold his birthright for a mess of pottage, so Wells traded his talent for a pot of message (although he was a fine one to talk). For clarity, Wells did identify his political views as socialist, but it was a distinctly non-Marxist socialism he advocated, and hoped would prevent the violence destruction that he believed class conflict would otherwise lead to without a technologically and socially progressive international movement.

His life had quite the Bittersweet Ending, as he was very worried about the rise of Nazism and warned that it might just lead to an apocalypse like the ones he'd written about, which can make it a relief that he lived long enough to see the end of World War II...until you realize this also means one of the last major scientific achievements he witnessed was another of his feared forecasts, the atomic bomb.

Often portrayed, in fiction, in Beethoven Was an Alien Spy-style situations, involving either Time Travel or Aliens. If they do involve time travel, he usually ends up in the modern world and becomes very depressed over the fact that modern society is just as far away from his proposed utopias as his own time was. Said fictional portrayals often leave out the fact that his voice resembled an English-accented version of Tex Avery's Droopy (as can be heard in a radio interview

he did with Orson Welles (no relation)).

It's been said that he invented almost every basic modern science fiction device except for alternate universes. His stories, along with those of Jules Verne, are also a major influence on Steampunk. Along with Jules Verne and Hugo Gernsback, Wells is often considered "The Father of Science Fiction".

In many ways, the works of Jules Verne and H.G. Wells are polar opposites. Verne paid particular attention to technological realism, making him perhaps the world's first hard science fiction author; but he paid little heed to the social ramifications of such technology, projecting 19th century Europe into the future indefinitely. Wells, on the other hand, cared little if his proposed inventions violated every known law of science, but he was keenly interested in how society would change and pulled no punches when it came to civilization's impermanence.

He is also considered a founding father of commercial wargames. He and some of his adult friends started playing with toy soldiers, and starting codifying rules. He felt it was better than fighting a real war, because "Tin soldiers don't leave behind tin widows and tin orphans." Wells eventually published Little Wars which contains the story of the creation of the game, the many balance and Game-Breaker issues they ran into, and a suggested set of large scale miniature rules. Little Wars is still required reading for prospective game designers. Another over-looked aspect of his life is that in his 'middle period' from around 1900-1920 he authored fiction that mostly lacked any science-fiction elements, such as Anne Veronica and The History of Mr. Polly.

It's probably also worth mentioning that the man was extremely popular with the ladies. The Other Wiki lists six confirmed lovers in addition to his two wives, and he probably managed quite a few others. Considering his bibliography runs to around 50 novels and a similar number of non-fiction works, he was clearly a master of time management. Hey, wait a second...

As one of the founders of science fiction, he often shows up in modern sci-fi works as a Historical Domain Character. Notably he was played by Malcolm McDowell in the film Time After Time and was Gender Flipped for the SyFy series Warehouse 13, played by Jaime Murray. He also appears in the Doctor Who episode "Timelash", played by David Chandler, though he was depicted very inaccurately.

Works by H. G. Wells with their own trope pages include:

Other works by H. G. Wells provide examples of: