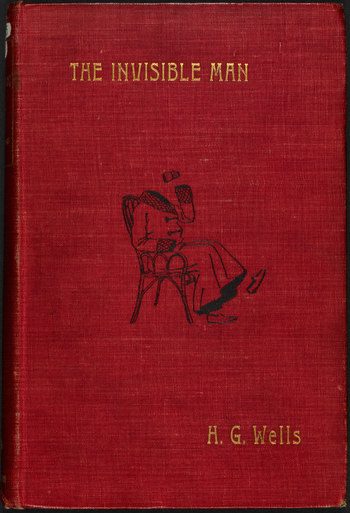 The Invisible Man: A Grotesque Romance is an 1897 novel by H. G. Wells, Trope Codifier for many Invisibility tropes. Not to be confused with the novel Invisible Man by Ralph Ellison.

The Invisible Man tells the story of an encounter the people of a sleepy English town have with a mysterious newcomer who conceals himself entirely with bandages. The townspeople grow ever curious at the secretive, dangerously short-tempered man and his experiments. Frustrated by the inquisitive nature of the locals, the man goes into a rage, tears away his bandages, and reveals to the people that he is in fact completely invisible.

From this point on, the story follows the invisible man's trail of destruction and terror across the land as he attempts to either find a cure for his condition or take over the country (whichever is more likely).

Like many classic works it's been adapted into other media many times. The most famous is the film version by Universal in 1933 starring Claude Rains. The BBC did a relatively faithful adaptation as a miniseries in 1984. In 2017, Big Finish released a full-cast Audio Adaptation boasting Sir John Hurt in the title role, and it was released only a few weeks after his death. A second film adaptation, starring Oliver Jackson-Cohen in the title role, was released in 2020.

The Invisible Man provides examples of: