Literature / The First Men in the Moon 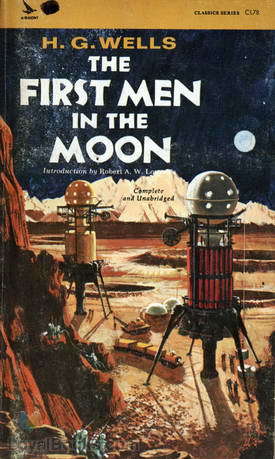 The First Men in the Moon is a 1901 Science Fiction novel by H. G. Wells about two Edwardian-era Englishmen who utilise some Applied Phlebotinum to fly to the moon for a bit of a jolly gadabout. Things don't quite go as planned. There have been two film adaptations made; one in 1964, directed by Nathan Juran, written by Nigel Kneale, and with special effects by Ray Harryhausen, and more recently in 2010 by Mark Gatiss.

In the 1964 film, the United Nations has launched a rocket flight to the Moon. A multi-national group of astronauts in the UN spacecraft land on the Moon, believing themselves to be the first lunar explorers. They discover a Union Jack flag on the surface and a note naming Bedford and Cavor, claiming the Moon for Queen Victoria. This discovery drives the plot, as the UN and many journalists seek out these men to get them to recount their first mission to the moon in the 1800s. Only Bedford is still alive and tells the story.

The 2010 film sticks much more closely to the H. G. Wells original, with Professor Cavor and Bedford engaging in their flight to the moon alone. The ending is significantly changed.

Though not a full-on adaptation, the first volume of The League of Extraordinary Gentlemen also features Professor Cavor as a major supporting character, and a struggle to possess the Cavorite that fuels his spaceship ends up driving much of the plot.

The 1964 adaptation provides examples of:

The 2010 adaptation provides examples of: