Literature / The Island of Doctor Moreau 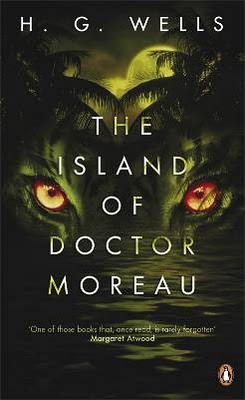 The Island of Doctor Moreau is an 1896 novel by H. G. Wells. Its story centers on Edward Prendick, the narrator, who is shipwrecked at sea and rescued by Dr. Montgomery. The good doctor takes Edward to the island where he works, a land so ominous that they quickly abandon him. Edward is soon introduced to the island's ruler, the Mad Doctor Moreau, and discovers Moreau's horrifying society of surgically-altered beasts that walk, speak, and struggle to live like men. The more he's around these beast-men, the more uncomfortable he becomes in his own society.

It was adapted several times for the screen; the earliest was in 1932 as Island of Lost Souls, starring Charles Laughton as the eponymous doctor. Other adaptations include The Island of Dr. Moreau (1977), with Burt Lancaster as Moreau, and The Island of Dr. Moreau (1996) (a full century after the book), with Marlon Brando as Moreau. In addition, it was unofficially adapted twice in the Philippines, as Terror Is A Man (with a single beast-man) and The Twilight People.