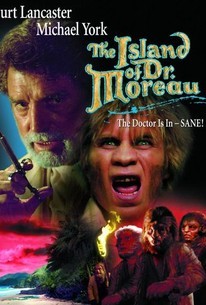 The Island of Dr. Moreau is a 1977 film adaptation of the novel The Island of Doctor Moreau. It stars Burt Lancaster as Moreau, Michael York as Andrew Braddock, Nigel Davenport as Montgomery, and Barbara Carrera as Maria.

Andrew Braddock (York) finds himself stranded on an island inhabited by scientist Dr. Moreau (Lancaster), who oversees a compound alongside his associate Montgomery (Davenport), the doctor's servant M'Ling, and the beautiful Maria (Carrera).

During his stay, however, he discovers that the island is also inhabited by man-beasts created by the doctor via surgery and an injection of serum containing human genetic material. Fearing Dr. Moreau might be insane, Braddock resolves to find a way off the island and escape. However, the doctor has no intentions on making it easy, as he aims to further his experiments...