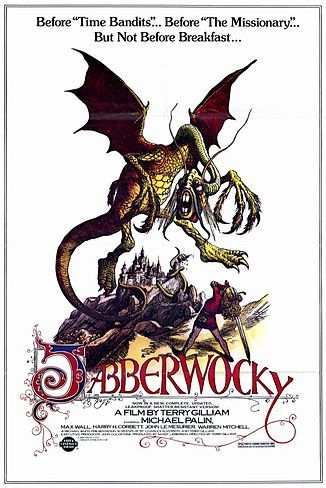 Jabberwocky is a 1977 British fantasy film co-written and directed by Terry Gilliam.

Set in Dark Age Britain, the film stars Michael Palin as a young cooper who is forced through clumsy, often slapstick misfortunes to hunt a terrible dragon after the death of his father. The name is taken from the nonsense poem "Jabberwocky" in Lewis Carroll's Through the Looking-Glass.

When the film was first released, it was promoted in some territories as Monty Python's Jabberwocky, due to the fact its director and star were both, at the time, best known for their work with the Monty Python troupe. Gilliam did not support this, and such promotions were short-lived. However, the film is occasionally still found listed in some Monty Python filmographies.