Film / Jason and the Argonauts 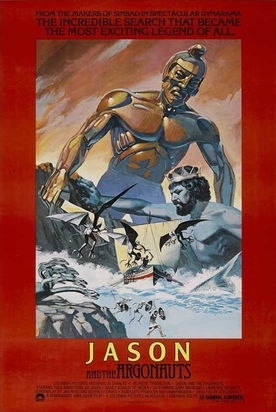 Jason and the Argonauts is a 1963 Sword and Sandal film directed by Don Chaffey. It is loosely based off a Greek myth, the most famous contemporary source for the myth being Apollonius of Rhodes' Argonautica. The film is most famous for its Stop Motion sequences created by Ray Harryhausen (who also produced the film). Bernard Herrmann composed the soundtrack.

The story revolves around the hero Jason (Todd Armstrong), rightful heir to the throne of Thessaly, whose throne was usurped from his father by Evil Uncle Pelias (Douglas Wilmer). Pelias offers to give Jason the throne if he sails to the end of the world to claim the Golden Fleece, something which many have tried but failed. Jason gathers a Badass Crew, including Hercules and other Greek heroes, and sets sail aboard the ship Argo. Together, the Argonauts encounter all sorts of adventures along the way. Jason's love interest is Medea (Nancy Kovack), a temple dancer, and the gods Zeus (Niall MacGinnis) and Hera (Honor Blackman) play roles in the story as well.

The myth has also been adapted into a 2000 television miniseries of the same name.