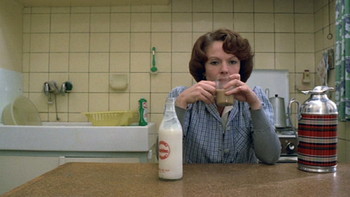 Jeanne (Delphine Seyrig) is a middle-aged Walloon woman living, as one might guess from the title, in Brussels. She lives what seems to be a pretty standard, indeed routine life: cooking, cleaning, doing the laundry, fixing dinner for her teenaged son Sylvain when he gets home. The only thing surprising about her is her job: Jeanne is a prostitute who entertains customers in the apartment when her son is out.

Jeanne's job seems as routine as the rest of her life. Having sex with the similarly middle-aged men who come to her door during the day is about as uneventful as cooking potatoes or knitting a sweater for her son. However, there is a disturbance in Jeanne's life, which is about to be upended.