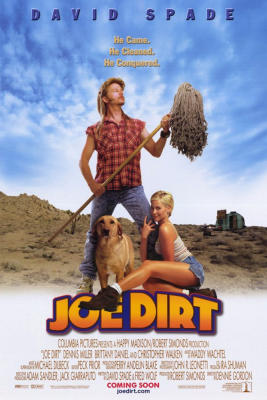 A 2001 comedy film starring David Spade as the eponymous mullet-wearing janitor, who's invited to be on a talk show, initially to be made fun of. However he begins recounting his life story and the movie showcases his journey to find his parents as he narrates, meeting a host of oddball characters along the way. Although the film was panned by critics, it was a modest box office success and was generally well-liked by those who watched it.

In 2010 TBS was set to develop an animated series based on Joe Dirt (with David Spade returning to voice the title character) but the project never made it out of Development Hell.

In 2014, Spade revealed that he had written a sequel for the movie that would premiere through Crackle's online streaming service. Joe Dirt 2: Beautiful Loser premiered on July 16, 2015, with Spade and several actors reprising their roles from the previous movie. Happily Married with Brandy and now a father of three, Joe finds himself losing it all and somehow lands in the past, meeting some familiar faces as he tries to get his family back while striving to become a man truly worthy of his wife and children.