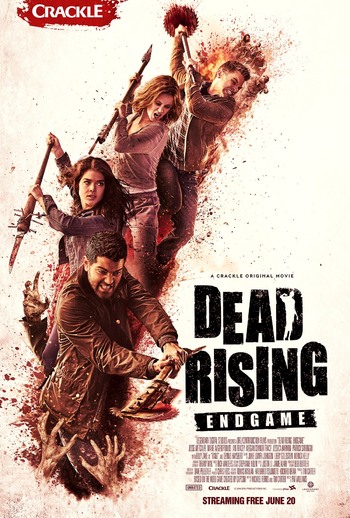 Dead Rising: Endgame is a feature-length film that premiered on the online streaming site Crackle on June 20th, 2016. It is a direct sequel to 2015's Dead Rising: Watchtower, and like it, serves as an Interquel for the Dead Rising video game franchise. Specifically Dead Rising 2 and 3.
Advertisement:

Two years after the events of Watchtower, Chase (Jesse Metcalfe) has continued to make increasingly dangerous runs into zombie-infested territory, attempting to figure out the truth behind the U.S. military's actions during the previous outbreak. During one such run, he discovers an imminent plot by the military to summarily execute every infected civilian by overloading their Zombrex chips.