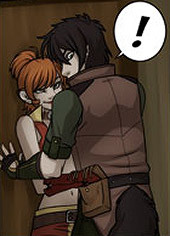 "While she was talkin' she slipped one hand into his fly-opening and tickled him up, at the same time helping herself to the wallet in his arse-pocket with the other. Second nature to her I was. It was the way she made her livin', anyway."
— Porta re "Pickpocket Petra", in The Commissar by Sven Hassel
Advertisement:

Some pickpockets execute their craft by avoiding all detection and making sure their victims never register the fact that contact was made. Others prefer just the opposite. Affectionate Pickpocket is when a character tries to disguise picking someone's as an affectionate hug. Or even a Kiss of Distraction.

For instance, Alice spontaneously gives Bob a great big hug. "Did I ever tell you what a great friend you are?"

May lead to Give Me Back My Wallet. Compare Distracted by the Sexy, Kiss of Distraction, Sticky Fingers, Five-Finger Discount and Percussive Pickpocket.