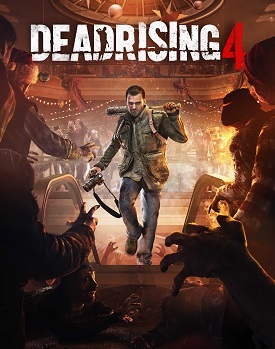 When all you have is a camera, duct tape, and a city's worth of Christmas decorations...

Dead Rising 4 is the fourth game in the main Dead Rising series. Announced at E3 2016, it's set almost a year after Dead Rising 3, and a full 16 years after the events of the original Dead Rising.

A 52-year-old Frank West makes his return as the game's protagonist. Frank, now a college photography professor, returns to Willamette, Colorado, to investigate a lead from one of his students, Vick. As they uncover some unethical experiments, Frank and Vick are separated, and Vick takes off without him. Frank is identified and labelled as a terrorist for attacking a government facility.

Four months later, just after Christmas, ZDC commander Brad Park tracks down Frank, currently in hiding, and delivers some troubling news. An unknown agency struck on Black Friday, turning the holiday shoppers in Willamette into zombies. A full-scale outbreak has been underway for over a month, with the U.S. government conspiring to cover it up and quarantine the area. Brad wants to find out why, and to recruit Frank towards that end, tells him that Vick has been spotted in the outbreak zone.

Frank and Brad set off for Willamette, only for their chopper to be shot down over the Willamette Memorial Megaplex Mall, an even larger replacement for the original. Frank splits up from Brad to find Vick, but soon ends up on the same trail she's on: finding out what caused the outbreak, and why a private military company by the name of Obscuris is being allowed to run rampant in the town's ruins.

The game features an investigative element, where Frank can use his camera to search for and record clues. It even comes equipped with a spectrum analyzer, which lets him find blood trails and other clues, and a night vision filter, to help him see in dark areas. The game has also moved away from the timer-based gameplay of the previous installments; there's no longer a time limit, giving players as much time as they need to complete the game.

As in the past two games, Frank can also assemble miscellaneous debris to create new and over-the-top weapons, and the combo vehicles from DR3 return here as well. Most crucially, Frank and co. can find and salvage "Exo suits" from military stockpiles. The Exo suit only lasts a short time before shattering, but enhances Frank's strength, letting him use heavy machine guns or rip parking meters out of the ground as improvised bludgeons.

The game has a timed release schedule: the Xbox One and Windows 10 Store versions were released in December 2016, with the Steam version coming out 90 days afterward. One year later, a "game of the year edition" called ''Frank's Big Package" was released on the PlayStation 4.