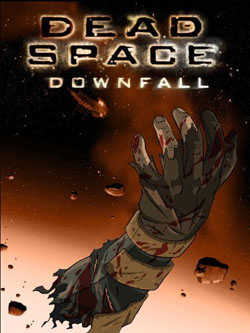 Dead Space: Downfall is a Direct to Video animated movie. Set in the Dead Space universe, it serves as a Prequel of the first game, going into detail about what happened onboard the USG Ishimura prior to Isaac Clarke reaching it.

The Red Marker is brought onboard the Ishimura. Meanwhile, the colony on Aegis VII is attacked by Necromorphs. One of the colonists escapes with the corpse of his dead wife and heads to the Ishimura, unaware that his wife is turning into a Necromorph. Onboard the Ishimura, the Unitologists want to worship the Marker, and start to otherwise go insane.

The colonists ship crashes into the Ishimura and the Necromorph escapes, eventually making its way down to the ship's morgue and infecting all the bodies down there. A team of crew members, led by chief of security Alissa Vincent, try to fight their way from the morgue to the top of the ship in a desperate bid to call for aid.