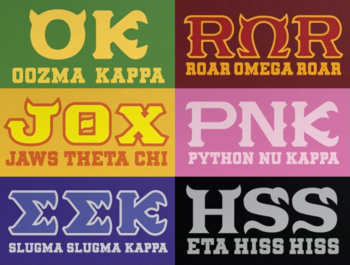 Want to make something sound scientific and from the future? Just put Greek into it!

Common Greek letters to be used are Αα Alpha, Ββ Beta, Γγ Gamma, Δδ Delta, Εε Epsilon, Ζζ Zeta and Ωω Omega. Other Greek letters like Ππ Pi or Χχ Chi will rarely get used because it would confuse viewers, while letters like Ηη Eta or Κκ Kappa would rarely get used for risk of the viewer not understanding the connection and think maybe they're referring to the mountain?

Or the other mountain?

Or perhaps the Composer? Or even a river imp that likes cucumbers?

More rarely, actual Greek quotations may appear. Names drawn from Classical Mythology are rather more common, as are biblical/philosophical words such as "logos", "theos" and "agape", as well as Gnostic terms like "sophia" and "archon" in more postmodern series. Note, however, that it almost never matches its Latin counterpart in prominence. This is due to the fact that, while an average speaker of English might recognize quite a number of Greek words,note And only provided that those are written in the Latin alphabet rather than Greek original, which, aside from some of the letters used in intermediate mathematics, is absolutely alien to almost every non-Greek-speaking person in the West (although those familiar with the Cyryllic script will most definitely have an easier time figuring out the correct pronunciation). chances are they would be unable to decipher the meaning of an actual sentence, something quite common when dealing with Latin, even with no prior background in that language. Greek might be part of the Indo-European language family, much like Latin, but it happens to be classified in a rather isolated subgroup. Let's just say, had it not been for Ancient Greece's powerful influence on European history, modern Greek would appear just as strange as, say, Albanian (which also forms part of the Indo-European language group).

This is a very old trope; some Roman authors had a habit of inserting Greek quotations into their works, and Latin acquired influences from Greek. At the time, Greece was seen as the source of culture, philosophy, science and learning in general, hence why science, mathematics, philosophynote which is roughly a Greek word for love of wisdom and such matters of academia have an addiction to do this, reinforcing the impression that if Smart People Know Latin, then really smart people know Greek (reinforced by the fact that most students of the two languages seem to agree that Greek puts Latin to shame in the difficulty department) and how everything in Greek sounds like futuristic Techno Babble. Also, the Greek language was pretty much the lingua franca for the eastern half of the Empire. This endured until the Renaissance. A part of why Rome is confused with Greece.

Part of why, in Science Fiction, if something is really high-tech or related to electronics/computing, people just put the suffix "-tron" on it (as with Tron Lines). Also see Gratuitous Latin, Xtreme Kool Letterz and The Backwards Я. Often part of a Mad Lib Thriller Title.