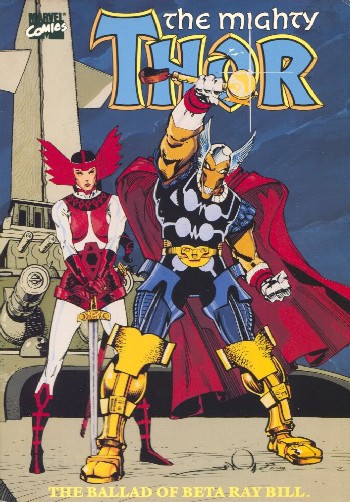 No, look again: that man is not precisely Thor

S.H.I.E.L.D. detected an alien ship heading towards earth, and sent Thor to deal with it. Thor found a powerful alien in it, and was defeated when he became the human Donald Blake again. The ship crashed on Earth and SHIELD surrounded it. Seeking Thor's hammer to use it in his defense, the alien found just a stick, and knocked the wall in anger with it... and got the power of Thor, and the stick became Mjölnir again. But after defeating SHIELD Odin had an urgent need of Thor, and teleported him to Asgard... not realizing, in the rush, that the guy with Thor's hammer and costume was not actually Thor. Beta Ray Bill was imprisoned and Donald Blake was turned to Thor and taken to Asgard, and things were clarified: Beta Ray Bill is the protector of his people, and confused Thor and Odin with the demons that were chasing him.

But there's a problem: for the first time, someone other than Thor has been worthy enough to lift the hammer, and he claims that he won it in battle. They tried to settle it in a fight to the death: Beta Ray Bill won, defeated Thor, but did not kill him. So Odin tried another approach: he made a new hammer, Stormbreaker, specifically for Beta Ray Bill. Both of them and Lady Sif returned to the ship, and destroyed the demons. Before leaving, Odin moved one enchantment from Mjolnir to Stormbreaker: Bill was now capable of turning into his normal self, that he had lost after so many modifications to turn him into a super soldier. And, on the other hand, Thor lost the power to become Donald Blake.

The Ballad of Beta Ray Bill provides examples of: