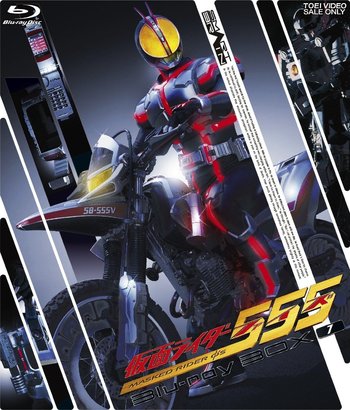 "The end justiϕ's the means."

20 Minutes into the Future, the Smart Brain megacorporation has achieved almost global dominance of the electronics and vehicle industry. However, their true goal is to Take Over the World by forcing mankind to the next stage in their evolution: the Orphnoch.

A young man named Yuji Kiba is involved in a terrible car accident, falling into a coma for two years and eventually dying. However, moments later he comes Back from the Dead, reviving as the Horse Orphnoch. Awakening to a world where his parents are dead, his career has been given to another man, his possessions have been stolen and sold by greedy relatives, and his fiancée has married his brother, he goes mad with grief and embarks on a killing spree. His rampage is stopped by the mysterious Smart Lady, the mascot character of Smart Brain, who gives him a new home and purpose; one that he soon comes to rebel against.

Mari Sonoda is an orphan who receives a Smart Brain briefcase and motorbike from her stepfather living in Tokyo. On her travels, she encounters the Stoic drifter Takumi Inui, and a mixup with their bags causes him to pursue her. Soon afterwards, Mari is attacked by an Orphnoch who is after the contents of the briefcase: the Faiz Gear. Putting on the Faiz Driver, Mari attempts to transform but is rejected by the belt. In desperation she puts it on Takumi, and he successfully transforms into Kamen Rider Faiz.

What unfolds is a saga between two men on different sides of the same war: friends as Takumi and Yuji, but fierce rivals as Faiz and the Horse Orphnoch. Things become more complex with the arrival of Masato Kusaka, another alumni of the same orphanage as Mari. He becomes the wielder of the Kaixa Gear, yet holds a deep infatuation with Mari and is not shy about disposing of any romantic rivals. The trio of belts is completed with the arrival of the Delta Gear, which can be used by anyone. Opposing them is Smart Brain's strongest four Orphnoch: Lucky Clover, whose objective is to seize all three Gears and awaken the mysterious Orphnoch King.

Partnered with the Super Sentai show Bakuryuu Sentai Abaranger after initially airing alongside the final episodes of Ninpuu Sentai Hurricaneger in the Super Hero Time block, marking the first such Rider/Sentai partnership to be accompanied by the name.

In addition to the main series, Kamen Rider 555 has two spinoffs. Kamen Rider 555: Hyper Battle Video is a DVD episode that was distributed by Televi-kun magazine, where a Smart Brain weapon kicks off a Musical Episode. Kamen Rider 555: Paradise Lost is a Non-Serial Movie set in a world where the Orphnochs have successfully taken over.

A manga adaption focusing on the character of Masato Kusaka was announced on September 13th, 2019, and is written by veteran Tokusatsu writer Toshiki Inoue.

Voted #7 series in the Heisei era and #7 product overall in NHK’s All Kamen Rider Popularity Vote.

I don't have tropes. But you know, I can protect them.

Open your eyes for the next Faiz.

Instead of simply exploding like most toku monsters, Kamen Rider Faiz's Orphenochs suffer this trope instead.

Instead of simply exploding like most toku monsters, Kamen Rider Faiz's Orphenochs suffer this trope instead.