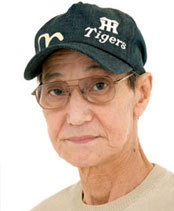 Gorō Naya was a Japanese voice actor for several decades, known for his authoritative, gravelly voice. By far his most famous roles are that of Inspector Zenigata in Lupin III and The Great Leader from Kamen Rider, both of whom he played for 40 years. His younger brother Rokuro Naya was a fellow seiyuu as well.

A lifelong smoker, Naya sadly passed away on March 5, 2013, due to chronic respiratory failure.