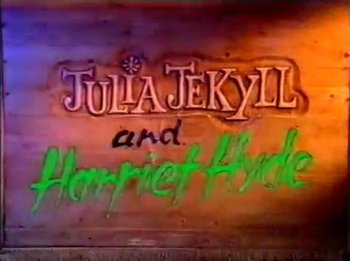 The strangest take on Jekyll & Hyde you will ever see.
Julia Jekyll and Harriet Hyde is a… strange take on the Jekyll & Hyde formula. It aired on CBBC from 1995 to 1998. It stars Olivia Hallinian as Julia Jekyll, a sweet and innocent girl who goes to Rocket Academy, who, after her elixir is tainted by the Blister Sisters, transforms beyond her control into Harriet Hyde, a sort of furry yeti creature with the same personality and voice as Julia.