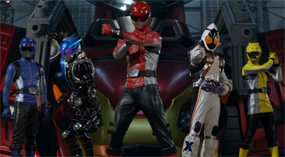 Super Hero Time is a programming block on the Japanese television network TV Asahi, featuring new episodes of tokusatsu television series from the Super Sentai and Kamen Rider series. Both series have decades of history and have been intertwined in the public imagination for some time, not least of all because the driving creative force behind both was mangaka Shotaro Ishinomori and they were both produced by the same production company, Toei Company. However, they did not air together until 2000 with Kamen Rider Kuuga and the last few episodes of Kyukyu Sentai GoGoV, though at the time they were not acknowledged together; even before 2000, the slot Kamen Rider ended up in featured the Metal Heroes and Robocon going back to 1989, while Super Sentai had only moved to Sunday mornings part-way through Denji Sentai Megaranger.

From 2007 to 2012, Super Hero Time was branded as part of a larger "Nichi Asa Kids Time"note Translates to "Sunday Morning Kids Time" or "Sunday TV Asahi Kids Time" programming block which was on from 7 am to 9 am JST, with all shows generally sponsored (and merchandised) by Bandai Namco Entertainment. Even before this branding, the general lineup of Sunday morning kids TV on TV Asahi was more or less formulaic, even sort of extending into 6:30 am starting in 2011:

The "Nichi Asa Kids Time" branding was discontinued in 2012, but the line-up remained consistent for another 5 years until the entire schedule was changed in late 2017. A news program called Sunday Live! replaced all morning programming up until 8:30, when Pretty Cure begins. After Pretty Cure is now the Super Hero Time block... with Kamen Rider first at 9 am and Super Sentai at 9:30.

Series that aired in this kids' block: