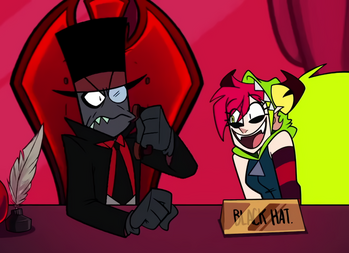 A good way of applying the humor of The Comically Serious to villains is by pairing them with the Perky Female Minion. This character is something like the Distaff Counterpart/Foil to the Enigmatic Minion; she can range in psyche from Punch-Clock Villain to fairly psychotic, but have an upbeat, Genki Girl personality, in sharp contrast to the (usually male) Big Bad she serves, who will be gloomy, Ax-Crazy, etc. If the female minion has a crush on her boss, which she often does, it will generally be of the Mad Love variety, although this affection isn't a requirement, nor is its reciprocation.

However, despite her cheerfulness and energy, she is usually still good at what she does. When this is the case, her employer usually views her as a Bunny-Ears Lawyer.

Compare Savvy Guy, Energetic Girl for a similar dynamic. Contrasts The Baroness for the exact opposite, a chilly/chilling and sadistic villainess. Can be a subtrope of Vile Villain, Laughable Lackey.