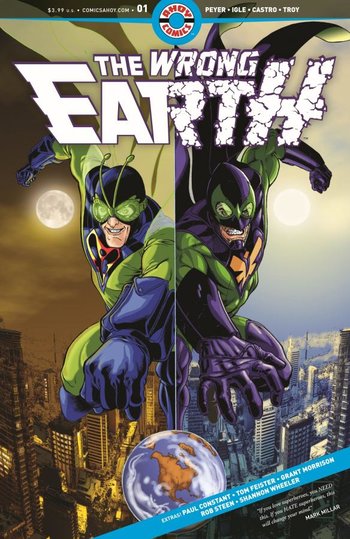 One's an Ideal Hero and Batman '66 expy, the other's a morally grey soldier fighting crime by any means necessary! Together, they have to struggle to survive each other's worlds after falling through a magic mirror. Such is the nature of Wrong Earth, published by Ahoy Comics.
Advertisement:

On Earth-Alpha, Dragonflyman and his sidekick, Stinger, are heroes of Incorruptible Pure Pureness who's sole mission in life is to protect their beloved Fortune City from all manner of costumed crooks. On Earth-Omega, Fortune City is a Crapsack World, and though Dragonfly also believes in protecting it from criminals, he does it in such a morally ambiguous way that it can sometimes be hard to tell who's the hero and who's the villain. Also, his version of Stinger is Dead to Begin With. When they accidentally get switched after trying to capture their respective versions of the villain calling himself Number 1, they quickly discover that there are more things in heaven and earth than are dreamt of in their philosophies.

The first volume was followed by a prequel called Dragonfly & Dragonflyman and then a second volume.