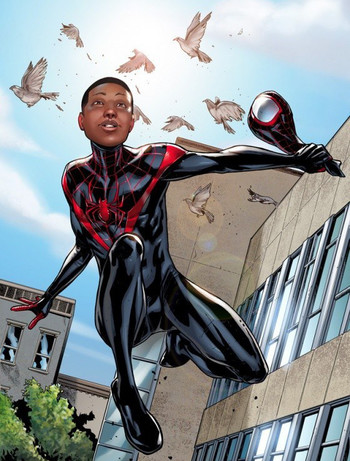 So, the Big Two comic publishers have a couple of issues. The first: brand new characters not heavily tied to already existing characters and continuity have a hard time becoming popular and long-lasting. The second, the eras when characters could stick (the Golden and Silver Ages) produced heterosexual white males almost exclusively. The solution to both? Take a preexisting character, and pass their superhero identity to a female, racial minority, or LGBT person!

Trouble is, the legacy characters, minority or not, often also don't stick very well and there is a history of them being replaced. It also doesn't help that sometimes, these new characters don't catch on and fall out of a regular role, occasionally resulting in another trope entirely. On the other hand, several of these characters have gone on to be popular and enduring heroes in their own right.