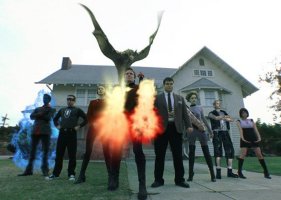 We're there for the oddball, the rebel, the outcast, the geek!
This is the story of the Specials...
...The 6th or 7th greatest superhero team in the world.
They have spent many a day fighting natural disasters and battling supervillains.
This is not one of those days.
Advertisement:

The Specials is a 2000 superhero parody film written by James Gunn and directed by Craig Mazin.

Centered on the sixth or seventh greatest superhero team in the world, the film follows the events of several days during which no major world-shaking events occur, instead focusing on the various team members' lives. During the course of the film, a new member joins the team, a line of toys based on the Specials is unveiled, and long-festering conflicts within the team come to a head.