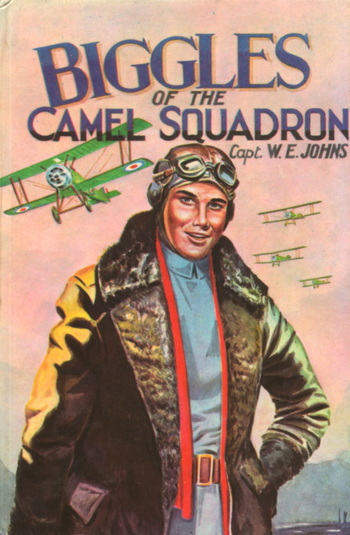 Biggles of the Camel Squadron. The third book in the series, but the first to feature the name "Biggles" in the title- all subsequent books would use it.
Biggles is a long-running series of books about James "Biggles" Bigglesworth, written by "Captain" W.E. Johns (the rank was self-awarded; Johns retired from the RAF as a Flying Officer, equivalent to a Lieutenant in the army) between the 1930s and the 1960s.
Advertisement:

Biggles originated in a series of short stories that Johns (himself a former airman) wrote for Popular Flying magazine, and the original intention was to provide the fighter pilots of the future with an entertaining way to remember the "tricks of the trade" he learned the hard way during World War I.

The stories became very popular with children, particularly young boys, and Johns began to write more to this audience. The story was advanced to the inter-war period, with Biggles and his friends acting as freelance adventurers, sometimes working for the British Secret Service, either directly or via the Air Ministry.

When World War II rolled around, Biggles naturally joined up and flew with the Royal Air Force throughout, having many adventures along the way.

The books continued after the war, with Biggles now a member of a new branch of Scotland Yard called "the Special Air Police", and Johns continued writing until his death in 1968, though the later books are not as highly regarded.

Although originally written as a realistic Great War airman — hard-drinking, running on pure nervous energy, often murderously vindictive towards the enemy, and only a matter of time until his number was up — Biggles then went into Contractual Purity. He became a strict teetotaler, and one of the early stories was retconned to replace whisky with lemonade, leading to the bizarre idea of squadrons of young pilots risking their lives to win a crate of lemonade. Similarly, while Biggles had a brief affair in one of the early stories, his later stories were all about the man's world of flying aeroplanes in which women and especially romantic endeavors have no place. Thus his young fans were outraged that an Australian radio adaptation had Biggles "go soft" by having a romantic escapade.

Biggles has in many ways dated very badly. Very much a product of its time, Biggles embodies the British values of Decency, Fair Play and Courage, and the casual sexism and racism of British society in the 1930s, though Biggles himself is shown to have been born and raised in India and speak fluent Hindi. The books are now generally considered fair for their day.

The colourful "ripping yarns" style of the prose is often parodied in British media, and Biggles is in many ways the archetypal Boy's Own story. Particularly satirised is Johns' habit of substituting colourful verbs in place of "said" in dialogue tags, and in particular his use of the verb "ejaculated" in place of "exclaimed".

Biggles holds a place in British popular culture comparable with Flash Gordon in the US, Though franchising of the books in other languages, he is still equally well known in the Dutch and French spoeaking countries. Especially after the books spawned several series of Franco-Belgian comics.

Although it's probably not too much of a stretch to suggest that, if Biggles had been an American series, there would have been numerous screen adaptations by now. As it is, there was only a short-lived 1960s TV series in Britain, an Australian radio-play and several attempts at comic strips in Belgium, France and Sweden. Finally there is a So Bad, It's Good 1986 Biggles: Adventures in Time movie (in which Biggles is joined by a time-travelling American salesman).

Biggles has been deconstructed and subverted many times. He was referenced multiple times on Monty Python's Flying Circus (thus paying homage both to Biggles' importance as British pop hero and to underline/mock the show's supposed "aviatorial" nature); he was also featured as "cardinal" in the infamous Spanish Inquisition sketches. His iconic chummy, square-jawed all-English character was also skewered in the character of foul-mouthed, alcoholic, working-class Brummie Major Wooley in Derek Robinson's trilogy of WW1 fighter pilot novels, a rather more cynical (and accurate) portrait of the personalities of the real "knights of the sky". Biggles has also been spoofed by blogger Reed dé Buch in Biggles Over Baghdad

, an ongoing series of short stories, setting Biggles in contemporary Iraq and Iran - definitively not part of the Biggles canon.

Has recently been in the news

when a pilot in Real Life used his knowledge of Biggles to make an emergency landing.

Tropes used in Biggles include: