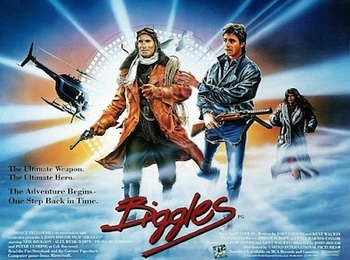 Do you want to be a hero?
Biggles, re-released under the title Biggles: Adventures in Time, is a 1986 movie featuring the fictional flying ace Biggles. It stars Neil Dickson as Biggles and Alex Hyde-White as Jim Ferguson, a character created for the movie, with Peter Cushing appearing in his final feature film role as Biggles' commanding officer, Commodore Raymond.
Advertisement:

Inspired by the recent success of Back to the Future, and attempting to provide a hook for the American market, the film has a time travel plot in which Jim Ferguson, an inhabitant of present-day New York, is transported back to World War I and helps Biggles defeat a German superweapon.