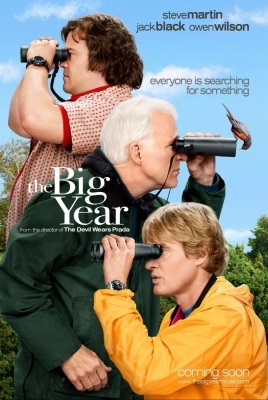 Everyone is searching for something.
Advertisement:

The Big Year is a 2011 film adaptation of the 2004 nonfiction book by Mark Obmascik starring Jack Black, Steve Martin and Owen Wilson as three birders, each trying to break the "Big Year" record for the most bird species seen in North America in a calendar year.

Inspired by… the true story of the 1998 Big Year competition (as recounted in Obmascik's book), it follows Black as Brad Harris, a computer programmer with an expert knowledge of bird calls who's saved up enough money to finally do a Big Year; Martin as Stu Preissler, a corporate executive on the verge of retirement; and Wilson as Kenny Bostick, a contractor and the current record-holder with 732 species.