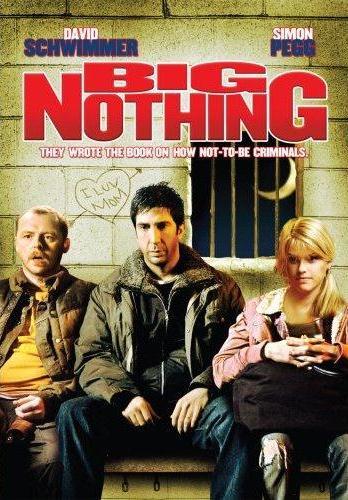 "My name is Charlie Wood...I think I made a big mistake..."
— Prologue of the Movie
Advertisement:

Big Nothing is a 2006 British Black Comedy, directed by Jean-Baptiste Andrea and starring David Schwimmer and Simon Pegg.

The story tells us about the former-teacher named Charlie Wood who got fired from the first day from his new job as a Call-Center Employee. Eventually one of his colleagues on the call-center, Gus Dickinson, suggested an idea to Charlie that they will try to blackmail a priest who happens to be listed in the company database of visitors to illegal porn websites so that they could get some extra money. Along with the help of Gus' companion, Josie, they began to execute the plan. However, when Gus tries to retrieve the money from the Reverend's house, things went downhill from there as the Reverend wielding a gun towards Gus and accidentally kills him. As a result, Gus, Charlie and Josie tried to cover up the tracks of their actions.

Big Nothing provides examples of: