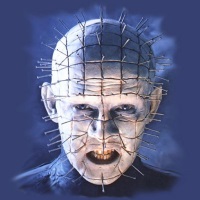 There are many kinds of Body Horror. Some are done from a Painful Transformation, Gorn, Orifice Invasion, Chest Burster, or something else terrible happening to a person's body.

This is when a person's body is mutilated due to deliberate intent.

Such a character has been subjected to body modification (tattooing, piercing, cutting, etc.) to a degree that goes beyond "fashionable" and straight into Squick. The kind of body modification that would make a person look like a monster, and their onlookers wince in imagined sympathy pain.

Why a character would be subjected to such extreme modification is varied. They might have been an innocent used as a human guinea pig, in which case they might be The Grotesque. Unless the pain of their modifications is such that it drives them to lash out. Alternatively, it may be a sign that a character is Obviously Evil, especially if they did this willingly to themselves. Evil Is Visceral after all, and there is little more visceral than mortifying one's own flesh.

If a character has a few obvious piercings or tattoos, they are not part of this trope. This is only when those body modifications are taken to such a torturous extreme that only a twisted mind would want to inflict or receive them.