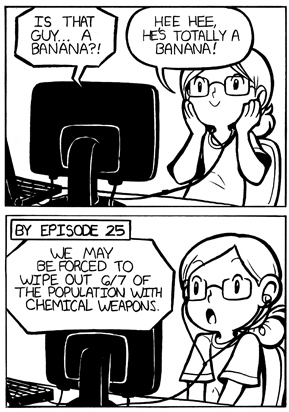 "8 a.m. on a Saturday, people."
"What's the word for when something that started out being funny ends up depressing the hell out of you? Insert that word here."
— Jenny Lawson, Let's Pretend This Never Happened
Advertisement:

A Tone Shift towards Dramedy over the course of a comedy series' run, coined by Eric Burns on the now-dead webcomic review blog Websnark after the process undergone by the print comic Cerebus the Aardvark.note It should not be confused with the slide from drama to Author Tract which happened much later in the same comic's run, due to Creator Breakdown. It's any story/series which starts out light, episodic, and comedic, and then assumes dramatic elements and a more coherent continuity. It chiefly occurs in works where parts have been broadcast/published before other parts have been written, as that means the older parts can't be revised into conformity.

Often seen in media where artists are expected to write a few short stories first to see how the public will react, and then start writing longer and more serious story arcs once the magazine/tv channel/company gives the go-ahead. It can also be intentional, with the lighter mood at the beginning allowing readers to meet and become attached to the characters before the story arcs with the dramatic elements begin.

Many newspaper comics undergo the opposite process as a cartoonist puts some fairly serious storylines the first few years, then lapses into recycled gags.

This condition also has a temporary version. After a while, many shows will begin to get enough respect to be considered for awards, and will create a specific episode for this. Since there's a Comedy Ghetto in effect, an episode of a show made as Emmy Bait will have fewer laughs and will usually tackle a more intense theme. When watching a show on DVD or in syndication, these episodes can stand out.

If the series has previously been fueled by high weirdness, then the transition can be rocky. Some series tie themselves in painful knots trying to Retcon an accumulated pile of weirdness with invented physics. Others sweep the stranger things under the rug and try to present a more respectable face. More often, the weird is left in place, but retrofitted into a more dramatic role. In a good case, the combination of drama and high weird can be invigorating. In a less successful case, it can be excruciating.

An instance of Mood Whiplash. May be heralded by a Wham Episode. When this entire process happens in a single moment, it's a Gut Punch. If the change is only temporary, it's a Very Special Episode. When an introduction of a specific character suddenly makes the entire work become serious, then the said character is a Knight of Cerebus. A Sudden Downer Ending incorporates this by default, as downer endings are rarely seen as funny.

May be a case of Growing the Beard if it actually works. Otherwise, fans may respond with They Changed It, Now It Sucks!.

This process may also involve Going Cosmic, with the work beginning to incorporate highly philosophical and theological themes.

It's Cerebus, not Cerberus

Tropes that relate to playing with this trope:

In his review for Helluva Boss, Saberspark brings up traits that fit the trope of Cerebus Syndrome.

In his review for Helluva Boss, Saberspark brings up traits that fit the trope of Cerebus Syndrome.