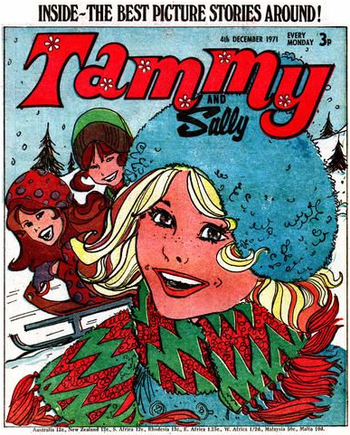 Tammy was a weekly British comic for girls published by Fleetway in London from 1971 to 1984. While there were similarities with its Fleetway stablemates Jinty and Misty, each comic had its own focus, with Tammy concentrating on sadder Cinderella-themed stories and dark tales of tortured heroines.
Advertisement:

As with most Fleetway publications, the title is currently owned by Rebellion, who used it for the Tammy & Jinty Summer Special in 2019 and 2020. The two specials were collected as Tammy & Jinty: Remixed in 2021.

Has nothing to do with the 2014 Melissa McCarthy film.