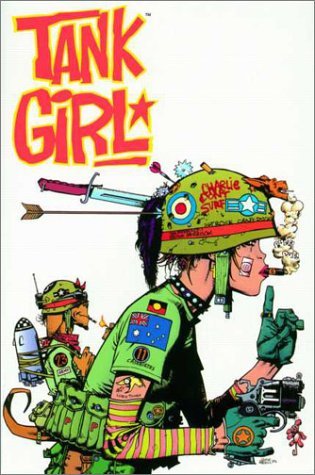 Tank Girl is a wacky British indie comic created by artist Jamie Hewlett (later of Gorillaz fame) and written by Alan Martin about a cheerfully sociopathic young woman who lives in a tank, her mutant kangaroo boyfriend Booga, her various bizarre and violent buddies, and knob jokes. Set in the Australian outback, most of its stories pay no attention to reality, the laws of physics, good taste, bad taste, yucky taste or conventional storytelling. Which is probably why it is so damn fun.

Frequently Crosses The Line, mostly because the writers don't seem to be aware that there is a line.

Tank Girl started as a comic strip in the British magazine Deadline. It was made into a movie in 1995 starring Lori Petty (The voice of Livewire) and also featuring Naomi Watts, Malcolm McDowell, and Ice-T. Unfortunately the movie flopped and was considered by the creators to be a bad adaptation, causing Hewlett and Martin to quit in disgust. The financial failure also caused the collapse of Deadline.

For contractual reasons, two mini-series were produced for Vertigo Comics to tie into the film: "The Odyssey", written by Peter Milligan and with art by Hewlett, and "Apocalypse" with neither Martin or Hewlett involved.

In the 2000s, Martin has revived Tank Girl for a series of mini-series with various comic companies.

And please, for the love of any God you believe, don't confuse this with Girls und Panzer or Tank Vixens for that matter. The multiverse can't handle that crossover.