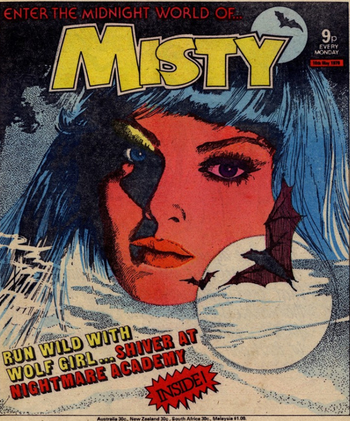 Misty was a British comic for girls published by Fleetway in London from 4th Feb 1978 until 1984, after merging with Tammy on 19 January 1980. While there were similarities with its Fleetway stablemates Tammy and Jinty, each comic had its own focus, with Misty concentrating on supernatural and horror stories. The title was created mainly by Pat Mills, on a hot streak following Battle, Action and 2000 AD and continued the ethos of those titles, with a focus on modern, creepier, gorier horror than earlier horror comics.
Advertisement:

The title was reused by Rebellion for the 2017 Halloween Special comic Scream! & Misty (Scream! having been Fleetway's horror comic for boys).