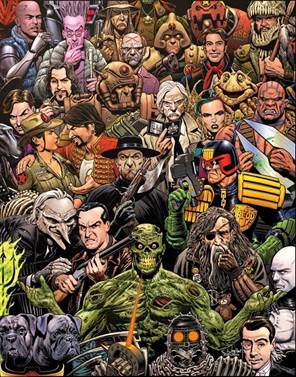 Borag thungg, Earthlets! It is I, Report Siht, Hive Queen in charge of the Galaxy's Greatest Website, and I'm here to tell you about 2000 AD.

The story of 2000 AD begins in 1977, when the mighty Tharg of Quaxxan in the Betelgeuse system arrived on your planet and found it dangerously low on thrills. He collaborated with the Pat Mills and John Wagner droids to produce a scrotnig sci-fi Anthology Comic. They gave it the futuristic name of 2000 AD, because they never expected it to last until 2000. Turned out they were wrong.

The main draw of the first prog was the return of popular 1950s hero Dan Dare, though MACH 1 proved rather more popular. However, the true breakout series was to be Judge Dredd, who debuted in the second prog and has appeared in every strip since. The mag has continued to play host to a wide variety of sci-fi comics, some scrotnig, some not.

Of particular note is that a huge chunk of the most zarjaz British writer droids currently contributing to American comics got started within the pages of 2000 AD. Basically, if he's British and popular in America, he probably wrote a few strips here.

Spiritually, 2000 AD is a descendant of Action, inheriting many of its themes, practices and motifs from the older comic, and many of its writers originally wrote for Action. Flesh and Shako in particular can be easily described as "Hookjaw, but with a T-rex /a polar bear instead of a great white shark".

Comics Which Have Run In This Mag Include:

(Note to Tropers: It appears that we have a Grexnix or two among you so do take heed of this notice to only add examples here that apply to 2000 AD itself, or to a large number of strips in general. If a trope applies to one strip, consider making a separate page for it).