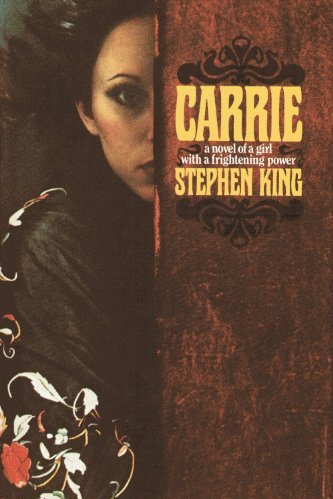 Carrie White — making people afraid to pick on "that girl" since 1974.
A novel of a girl possessed of a terrifying power.
Advertisement:

Published in 1974, Carrie is the first published novel by author Stephen King.

High school outcast Carrie White has no friends at school and is endlessly tormented by her classmates and by her own mother, a raving Christian fanatic named Margaret. After being humiliated in the school shower while having her first period, Carrie learns that she possesses potent telekinetic powers which allow her to move objects and knock people down with her mind. After one of the shower bullies, Chris Hargensen, gets suspended and barred from the upcoming prom for the shower incident involving Carrie, she comes to blame Carrie for the situation and vows to work out a suitable revenge.

In the meantime, Sue Snell — another of the suspended bullies from the shower — feels bad about what she and her friends did to Carrie and asks her athlete boyfriend, Tommy Ross, to invite Carrie to the prom as a form of atonement. Chris finds out about this and sees an opening for one of the greatest pranks in school history: she and her friends will rig the ballots for prom queen so that Carrie wins, then dump a bucket of pig's blood on her head in front of the entire senior class and thus humiliate her on the best night of her life.

Unfortunately, this proves to be the worst mistake that anyone could ever have made, as Carrie proceeds to turn her power into a horrifying weapon, with devastating consequences not only for the bullies, but for everyone in the town of Chamberlain.

While Carrie was a bestseller that launched Stephen King's career, today it's better known for its assorted adaptations in various mediums.

Don't confuse this work with Carrie Underwood (though her video for "Before He Cheats" is a homage to the film), the late great Carrie Fisher, or two other well-known fictional Carries.