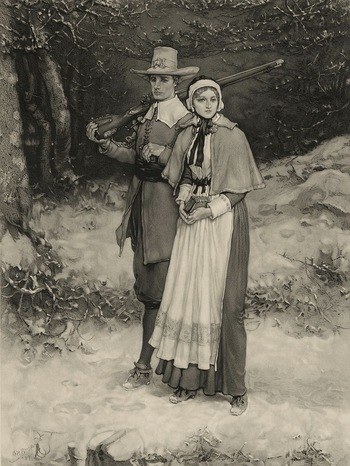 "The Puritans, our ancestors. People so uptight, the English kicked them out."
— Robin Williams, Live on Broadway
Advertisement:

Culturally, New England differed from the other thirteen colonies in that it was founded by religious dissidents, whereas the rest were mostly settled for economic gain. Only Maine and New Hampshire weren't founded by religious denominations, and both were absorbed by Massachusetts. Due to this, the church became a big part of New England life and the region was historically a hotbed of Protestant fundamentalism. As a result, New Englanders were often stereotyped as pious and evangelical. A related stereotype was that New Englanders were rabble rousers; and, given that the region was a locus for revolutionary and later abolitionist activity, there is some Truth in Television to this. Expect the Pilgrims and the Salem Witch Trials to be referenced when this trope is brought up.

Ironically enough, modern-day New England tends to be stereotyped as being both very liberal and secular, with the Deep South being the region now associated with "Bible Belt" religiosity. (Adding to the irony, the modern Christian denomination most connected to the Puritans, the United Church of Christ, is highly progressive.) This is largely due to waves of Catholic immigration as the Evangelical Protestants moved westward. However, this trope will still pop up, often in Historical Fiction and when Lovecraft Country is invoked. A Sub-Trope of The Fundamentalist and Hollywood New England. Will often involve a Sinister Minister.