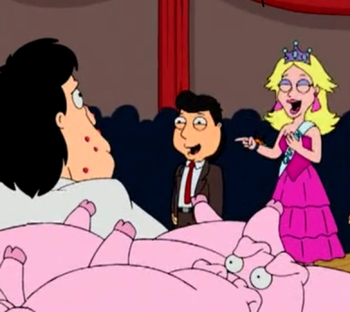 The Prom Queen indulging in her favorite pastime-laughing at a loser who got humiliated.
Veronica: Doesn't it bother you that everyone at this school thinks you're a piranha?
Heather Chandler: Like I give a shit. They all want me as a friend or a fuck. I'm worshipped at Westerburg, and I'm only a junior.
— Heathers
Advertisement:

One of the most well-known laws of any story about High School — if you're popular and beautiful, you're basically Satan's minions.

In most works of fiction, the popular kids at high school, or even junior high school, are made up of good-looking but mean-spirited bullies who delight in tormenting the dorks and dweebs they attend class with, whether it's beating them up for lunch money or homework answers, or humiliating them for petty slights.

The popular guys are usually on the football team, sporting varsity jackets while they give some nerd kid a wedgie or stuff him in a locker. They could also pull down their pants to show off his “tighty-whitey” briefs, throw him in a garbage can, and call him insulting nicknames that the rest of the student body repeats.

Meanwhile, the popular girls form a Girl Posse, led by the Alpha Bitch, using their beauty to seduce guys from their girlfriends and mocking less popular girls for everything from their fashion sense to their unusual interests. They might even spread vicious rumors about their worst enemies and set them up to be humiliated, especially if they're cheerleaders and can set up a pep rally to pull a nasty prank in front of the whole school.

If there is a nice person who is part of the popular crowd, they will be revealed to be a Peer-Pressured Bully who is secretly unhappy, because of course, even when you're friends with the popular kids, they're not really your friends, always pushing you to be mean or do bad stuff, and threatening to ruin your life of you don't comply.

The good guys in these stories are usually the unpopular kids, who eventually decide they're fed up with being treated like trash and overthrow the popular kids to free the school of their tyranny. If one of the unpopular kids becomes popular, they will snub and maybe even bully their old dorky friends, either from Acquired Situational Narcissism or out of pressure from their new cool friends.

Once they fall out with the popular crowd, they will revert back to their kind, good-natured self. In fact, many cool kids who become unpopular in works end up becoming much nice and happier as a result, so many times in fact, that the moral of the story can usually be summed up to "Popularity corrupts people, so it's better to be a loser."

This may be because of a Popularity Cycle - because popularity is ephemeral, you have to be the scariest of the bunch to stay on top. Probably stems from Write What You Know. A lot of people who end up in creative roles were low on the popularity totem pole during their high school years and often project their resentment about being looked down on by "popular" students into their adult creations.

Stunts the popular kids will pull are things like It's a Costume Party, I Swear!, Prank Date, Party Scheduling Gambit, Instant Humiliation Just Add Youtube, "Kick Me" Prank, and too many others to list. They'll be the Carload of Cool Kids, or the Snobs on the Slobs vs. Snobs.

Compare Popular Is Dumb, which can overlap with this trope, but mean and stupid are two different things.

Examples of the trope: