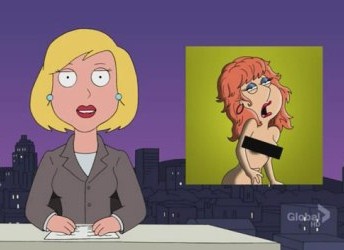 Joyce Kinney later features it in a news story. Lois is outraged and when confronts Joyce, she finds out it was in retaliation for a prank she pulled in High School, where Joyce was pantsed in front of the student body with a hot dog shoved in her mouth. Joyce's last name is revealed to be Chevapravatdumrong (which is the last name of one of the writers on the show), but she changed it to Kinney, since she believed that the news will never let that on air. Lois then says that the prank was a long time ago and that she was sorry for what she did. Joyce scoffs and tells Lois to "go talk to a news reporter."

Lois confesses what happened to the family but finds herself ostracized everywhere. Chris faces bullies at school who tease him about his mother. Meg joins in and says "yeah your mom is gross and nasty," but, as usual, gets told to shut up and stay out of it.

She eventually finds herself at church and is ordered to leave. Crying and depressed, Brian tells her that she may not be able to rectify her mistake, but she can make it so that way no one mocks her for it by making fun of herself for it (like how Ryan Seacrest made jokes about his alleged homosexuality to keep others from doing the same). Lois arrives at church the following week and, comparing herself to Mary Magdalene, shows the film to the congregation, winning their approval. Joyce is not pleased that the congregation forgave Lois.