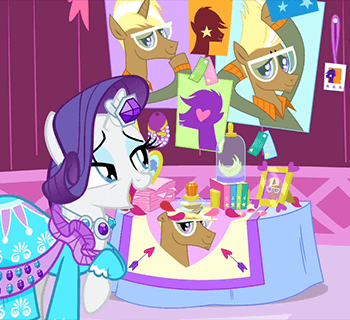 He's too obsessed with another girl to notice her, though.
Shepard: Conrad. If you have some kind of weird shrine of me, I'm going to be very unhappy.
Conrad: It's just a poster with a few candles. It's very tasteful!
Shepard: Gah...
— Mass Effect 3
Advertisement:

What's a good way to show that a character is a bit more attached to someone than is really healthy? That this someone is a Yandere or a Stalker with a Crush or just very, very creepily obsessed? Have a special private place in the character's residence that is dedicated to the object of the person's obsession. A shrine to them.

The contents of the shrine may vary, but they usually consist of photos of the stalker's obsession. Lots of photos. More rarely, newspaper and magazine articles, timelines, address book information, or videos are added. If there's a statue or bust of the stalkee, it has probably been kissed. For extra creepiness factor, a couple of half-melted candles are strategically located at the base of the shrine. There might also be locks of hair, trash, or other mundane items stolen from the object of the stalker's obsession.

While encountering a stalker shrine is almost always a very creepy event, on rare occasions, it can be strangely touching as well if the stalker truly cares for the target of their obsession. The shrine is simply a substitute for their physical presence. A less creepy version replaces the shrine with a hidden stash of photos of the obsession taken in secret.

Compare Shrine to Self, Shrine to the Fallen, Trophy Room, and Kitsch Collection. See also The Doll Episode. Subtrope of Room Full of Crazy.