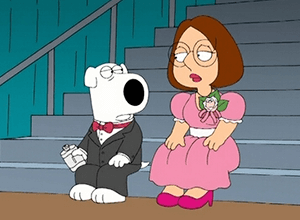 After Mayor Adam West deploys the entire Quahog police department to Cartagena, Colombia to search for a character from the 1980s action movie Romancing the Stone, Joe becomes bogged down at work, being the only officer not sent to Colombia (he was not sent because South America “isn't wheelchair accessible”). Because of this, Peter and the guys decide to become police officers in order to help Joe. Meanwhile, Brian escorts Meg to the prom, and, after chewing Connie out on why she rags on Meg, becomes the object of Meg's increasingly deranged desires.