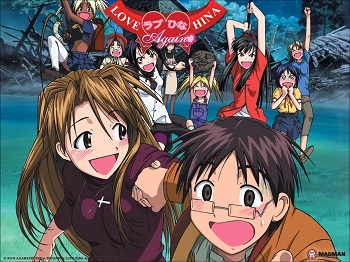 A Subtrope of the Harem Genre, a Romantic Comedy with one male protagonist, one female Love Interest, and a bunch of female side characters who also happen to be in love with the protagonist (or at least like him very much).

In these stories, the bigger emphasis is usually on the "romantic" part of Romantic Comedy, with the relationship building between the main Official Couple, and the side characters are only there for the viewer to like them, and maybe as a Romantic False Lead, to keep some drama between the main characters.

Certain character types like the Hot Teacher or the Ojou are likely to be members of this, as a straight romantic story with them at the center often wouldn't work at all, or at least it would invite too many unusual plot points for a standard series. Not that it hasn't been done; the Little Sister Heroine was nearly always a hopeless minor haremette before Oreimo made it popular to put her in the lead or let her win.

A romantic story with a Tsundere is usually very likely to get into this trope, as the authors like to use some of the support girls for Romantic Runner-Up in the love story between the protagonist and the extremely jealous main girl.

One of the causes for this set-up might be if it is the adaptation of a Romance Game, where every girl got the focus of attention in her own route, but only one route got an adaptation. In fact, even in Dating Sims and romance Visual Novels, this trope can still occur if the game is clearly biased in favor of a specific love interest.

Contrast with Balanced Harem, where several girls have equal prominence during the story. See also Top Wife, a further evolution of this trope, where there's clearly one girl at the top but the protagonist still gets to Marry Them All.