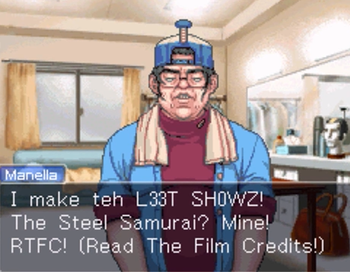 "Leet speak" (or "1337 Sp34k") is a form of obfuscated writing which replaces letters with numbers, symbols, other letters, or combinations of the above that resemble whatever letter is being expressed.

A similar phenomenon is chatspeak, which consists of abbreviations, like "lol", "wtf", and "omg". Chatspeak also usually omits punctuation and capitalization. Originally leet speak came into being as a way for hackers, crackers and pirates to circumvent the primitive word-based censoring on bulletin boards, while chatspeak was born out of a need for speed and convenience when typing on handheld devices. Nowadays both are mostly done for parody or simply out of laziness. Chatspeak, along with numerous other forms of net slang, has been a tremendous influence on leet, so expect loads of overlap. Kitty pidgin is the specific mixture of the above inspired by LOLCats.

You'll also want to be on the lookout for deliberate typos like "teh" (the), "liek" (like), and "pwn" (own, i.e. defeat), Xtreme Kool Letterz, phonetic spellings, not-so-phonetic spellings, and much, much more. Leet is also very grammatically loose, so "haxxorz" can mean "hacks" or "hackers" depending on context. And most importantly of all, leetspeak should never be consistent. Different symbols should be substituted for the same letter within a single sentence, word, or even character. The more random it seems, the better.

See also Letters 2 Numbers, Future Slang, and Techno Babble. We have a home page written like this.