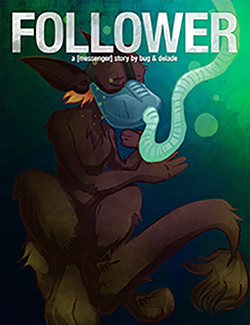 There will be a great deal of hardship on the road ahead, but I know you will all make it.
Advertisement:

is a Sci-Fi comic by Bugbyte and Delade about Half Human Hybrids called the chio (officially called vloxen) created by the U.S. military's Cottontail project, and the staff of the base where they were made. It is a prequel to Messenger.

Moral Guardians are in an uproar over a new organ cloning project, surveillance has taken new dark turn with the introduction of tracking chips with virtually unlimited range, and the U.S. seems to be getting closer to Civil War every day. Meanwhile, in a secret military base somewhere in the southwest, an initiative to create super soldiers has begun to yield results. The chio are the first success of this project. A new species made to be America's next super weapon. At the center of it all is a General who wants to use the chio to for their original purpose, the base research staff who (mostly) want to protect them, and the chio (vloxen) themselves are caught in the middle.

The comic was first published on October 14, 2012 and has updates weekly, although the exact day varies. It is illustrated by Bugbyte and written by Delade. It also has a spin off “Ask a Chio” tumblr where questions directed to the titular creatures are answered which can be found here

, where they answer reader questions about their comics and themselves.