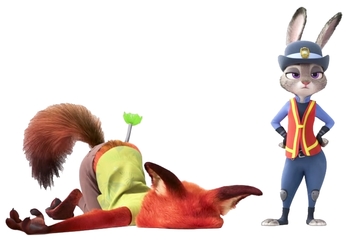 An elephant tranquillizer used on a fox?
That'll keep him down for awhile.
...maybe permanently.
Star: What's that thing on your neck?
Tom: [with dart on neck] What? I don't have a thing in my neck. What's that thing on your arm?
Star: [notices dart on arm] Huh? [starts getting groggy] What are you doing on the ground? What am I doing on the ground? [falls unconscious]
— Star vs. the Forces of Evil
Advertisement:

Simply put, a dart is a thin, pointed projectile that is shot, thrown, blown, or otherwise flung at the target from a distance. May contain an antibiotic, vaccine, tranquillizer, or poison. For some reason, whenever a character gets hit with a dart, it always has a tranquillizer in it. Maybe it's because people on drugs are funny. Maybe it's because the writers don't know enough about other types of darts. Whatever the reason may be, this seems to be the most common type of dart in fiction. The sedative is either smeared on the dart or contained in an ampoule or capsule attached to the dart.

This small projectile, usually fired into the neck or buttocks, seems to put the target to sleep within a minute. If that much.

If Played for Laughs, everything will slow down, including the character's voice.

Occasionally the dart will have a non-sedative but related effect, delivering a paralytic or amnesiac drug instead, so the target is still conscious but either can't move or won't remember what happened.

Usually the result of a character not being able to be reasoned with due to a Language Barrier. May overlap with Instant Sedation. Often results in Non Sequitur, *Thud*. Sister trope to Knock Out Gas which works better for area attacks. Often used in a Knockout Ambush. Sometimes used as Family-Friendly Firearms. Compare Laughing Gas.