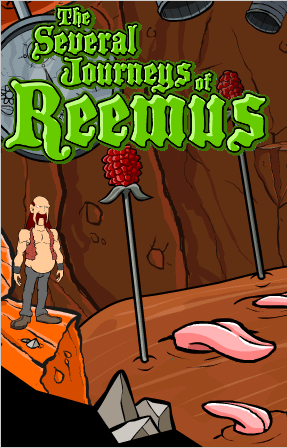 In the kingdom of Fredricus, there is a man. A mighty dragonslayer renowned throughout the lands for his deeds. A hero unlike any other. This is his brother's story.

Reemus is an exterminator living in the kingdom of Fredricus. He yearns to be recognized as a hero, but he lives in his brother's shadow. Trying to help him with his goal is Liam, a small purple bear, who isn't much good in a fight but has a good head on his shoulders and is a talented musician; he's Reemus' chronicler, balladeer, and closest friend. Together they take on all manner of bugs and beasts that cause as much trouble (if not more so) than a dragon but are much lower-profile.

There are currently five installments - the prologue

. Chapter four was previously only available to those who preordered the premium installment, the Ballads of Reemus: When the Bed Bites, but was released at the same time as Ballads was released to the general public.

There was a Kickstarter

for a second premium installment, "Ballads of Reemus 2", that will reboot the plot of the original four installments with new puzzles, go beyond where they left off, and bring the plot to a conclusion.

The Several Journeys of Reemus has examples of:

The Ballads of Reemus: When The Bed Bites has examples of: