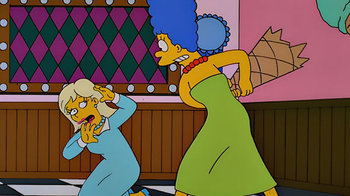 Otto breaks up with his fiancee Becky at the altar, leaving her to stay at the Simpson's house, where Marge fears Becky will replace her as a better wife and mother. Meanwhile, Principal Skinner assigns Bart's class into making a video (so long as it's not a parody or rip-off of The Blair Witch Project), which the school was able to afford by cutting geography lessons from their budget.