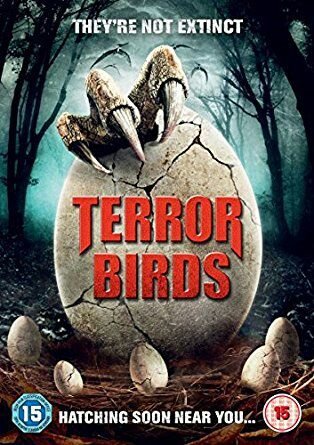 Terror Birds is a Horror Film by Sean Cain.

One day, Keith Stern (Craig Nigh), a birdwatcher is in the woods for his usual thing, when he stumbles across an electrified fence. He scales it, and the next bird he sees is the last one.

Some time later, the birdwatcher's college-aged daughter, Maddie Stern (Jessica Lee Keller) gets worried when she realizes he's been away on his birdwatching expidition for far longer than he usually is. With the help of her friends (and one girl one of them is dating), she heads out into the woods he usually goes to to find out what happened to him.

They track him to the same facility he went to, and soon discover that the owners of the facility have the world's last two terror birds in captivity, and have been trying (unsuccessfully) to get them to breed and produce healthy chicks. However, now that the kids have discovered the facility, as well as what's been going on there, there's no way they can be allowed to leave alive.