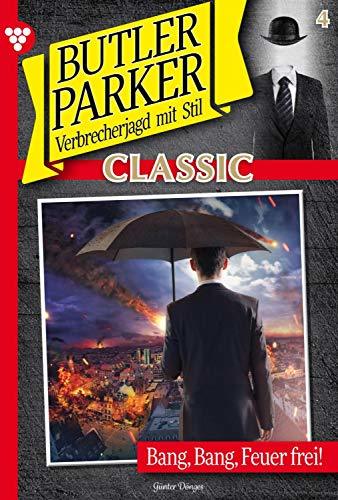 From the mid-'50s to the early '90s, Butler Parker was the protagonist of humorous thrillers in German pulp-format (stapled booklet of ca. 60 pages, trade-paperback sized). Originally part of a different series of unconnected stories, the stories around Butler Parker quickly turned into a forthnightly series of their own, published by several different editors over time.

Originally Butler Parker was butler for an American lawyer, Mike Rander. In his own series, after about 150 issues (the exact numer is hard to ascertain, as it was re-started and reprinted several times, and the 'real' series started at #119 - while it should have been #127 or so), he changed into the service of Lady Agatha Simpson. Mike Rander soon re-joined the team, which was completed by Kathy Porter, the lady's companion of Lady Agatha.