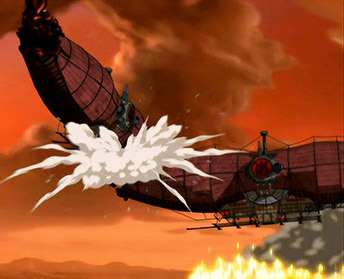 Zeppelin collision from Another World.
Here's a phrase that apparently the airlines simply made up: "near miss". They say that if two planes almost collide, it's a near miss. Bullshit, my friend. It's a near hit! A collision is a near miss!
[WHAM! CRUNCH!]
"Look, they nearly missed!"
— George Carlin
Advertisement:

So you have a bunch of flying things, usually aircraft, and something's destroying them. How to make it look cool? By having one of the planes damaged enough to cause it to veer off course and crash into another airplane.