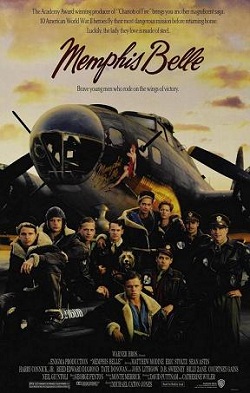 In the summer of 1943, a fierce air battle raged in the skies above Europe. Every day, hundreds of young airmen faced death as they flew bombing raids deep into enemy territory. Fewer and fewer were coming back.
Advertisement:

Memphis Belle is a 1990 World War II movie directed by Michael Caton-Jones, loosely inspired by the real-life story of the first bomber crew in the US 8th Air Force to complete a full tour of 25 missions over occupied Europe. Although some elements of the plot are accurate (Memphis Belle, tail number 41-24485, was assigned to the 324th Bombardment Squadron, 91st Bombardment Group (Heavy), whose insignia are prominently displayed), the characters are fictional and the mission depicted is based on several different air strikes in 1943-44.

The movie follows the crew as they attend a squadron dance the night before their final mission, giving us the opportunity to meet them and some of the other crews (notably the rookies who will be flying next to them the next day), before dropping the news on them: they've all been expecting an easy target to ensure the crew will successfully complete the tour, but the target is actually Bremen, a heavily-defended aircraft factory wedged between a hospital and a school.

Watching their progress is Army Public Relations man Lt. Colonel Derringer (John Lithgow), who plans to take the men on a publicity tour of the USA when they return. The officers have been told, but the pilot — strait-laced Dennis Dearborn (Matthew Modine) — opts not to tell the men, to keep their minds on the job.

Of course, none of that will matter if the flak or the fighters get them first...

This film is not to be confused with The Memphis Belle (aka The Memphis Belle: A Story of a Flying Fortress), the 1944 documentary by William Wyler focusing on the Real Life crew of the real-life Memphis Belle. Compare with Fortress (2012), another film about a B-17 crew in 1943.