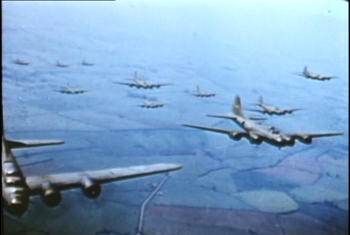 The Memphis Belle: A Story of a Flying Fortress is a 1944 documentary feature (just barely feature length, 42 minutes) directed by an uncredited William Wyler.

It is an account of the 25th and last mission of the Memphis Belle, a B-17 bomber that was part of the 324th Bombardment Squadron of the United States 8th Air Force during World War II. The Memphis Belle is shown taking part in a raid on the submarine base at Wilhelmshaven, Germany, on May 15, 1943. Pilots and crew attend a briefing in which the target is revealed and the plan of operations is explained. The Belle, along with all the other bombers in the squadron, takes off and goes on its raid. The Belle has to brave German anti-aircraft fire and fighter attacks before dropping its bomb load. Although the squadron takes a lot of casualties, the Memphis Belle makes it back safely to its base at RAF Bassingbourn, England, and the crew is greeted by King George VI and Queen Elizabeth.

William Wyler was an active-duty major serving in the First Motion Picture Unit of the U.S. Army Air Force. This film, as well as the subsequent war bond drive that the crew of the Memphis Belle went on, served to make that ship the most famous American bomber of the Second World War. 46 years later William Wyler's daughter Catherine produced a fictional feature film, Memphis Belle, which was loosely inspired by this film and the crew of the real Memphis Belle.

See also Twelve O'Clock High, another film about the 8th Air Force. See also Report from the Aleutians, a similar documentary from John Huston about the Army Air Force in the Pacific theater.